Jump to navigation Jump to search Jump to content

The history about Hunderfossen

Next opening day is Thursday 21. May 2020 | Opening hours and prices | Buy ticket 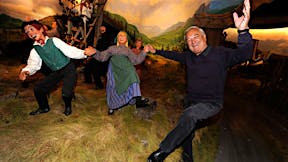 Once upon a time, a man from Lillehammer sat on his veranda and read Dagbladet. His name was Anders and he lived on a large and beautiful farm, a bit north from the city, by a waterfall called Hunderfossen. He got the farm after he married Kari, who had inherited it. A large amount of forest came with the farm. In addition, his father-in-law Simen had opened a cosy pub and camping on his land.

While his wife called that dinner was ready, the man was reading an article he could not stop reading. The article was called “Caprino gives up after 18 years”. The man read on about how Ivo Caprino had battled with Oslo Kommune bureaucrats for many years about a fairy-tale project, first at Holmenkollen, then at Sognsvann. Not so long after, Anders Huuse called Ivo Caprino, and showed up in person at Snarøya outside Oslo with his sketches. Caprino, who had given up, was not particularly willing to talk with him. However, after he had seen Hunderfossen landscape, he agreed, “This is where the trolls belong!” In Gudbrandsdalen forest near Lillehammer, a short distance from the Jotunheimen and Rondane mountains. Ivo Caprino wanted to build a 14-meter high troll that was sitting, inspired by Kittelsen’s drawing of the troll who wondered how old he was. It was to be the world’s biggest troll, and should cost about 5 million Norwegian kroner.

If convincing Ivo Caprino was a laborious task, getting the building permit and the loan for a troll was going to be even more arduous. The building council, Lillehammer Kommune, and bankers could not believe their own ears. The reason was quite simple, they could find pages and pages about building houses in Norway, but nothing about a troll.
Deals with building agencies and with banks were finally signed, and the building of the troll could start. However, the contractors did not get an easy job. It was simply impossible to cast a troll so big and so wrinkly with the usual formwork methods.

It turned out that Anders had to go offshore to find the solution. A new technology was used to repair oil platforms in the North Sea. Concrete was added a substance that makes it dry within seconds. This method had never been used on land before, but it was perfect to cast a troll.

This is how the world’s biggest Troll sat down at Hunderfossen near Lillehammer. Under him, caves were dug to make room for Asbjørnsen and Moe’s Fairy-Tale World. Around him, a fairy-tale park grew up, full of activities that are nowhere else to be found. A Winter Park and an Ice Cathedral, where many couples got married, were even built.
The cosy pub was eventually turned into a hotel and restaurant in the same distinctive style. The Norwegian Public Roads Museum has been a good neighbour and thanks to the ‘94 Olympics, one of Europe’s bob and luge tracks was added to Hunderfossen. Visitors are both local and long-distance travellers, and Hunderfossen has become one of Norway’s most visited tourist places. The family park kept on getting bigger every year, until it stopped growing indeed. 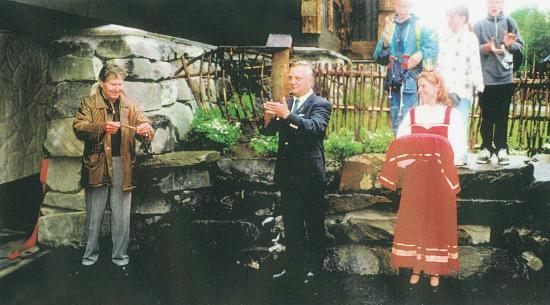